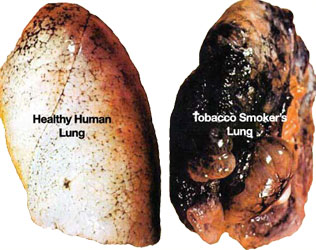 The unfortunate reality of lung cancer is that in most cases, symptoms don’t present themselves until the disease has advanced. Educating the public on the common sources and risk factors has become valuable for early detection, since the majority of cases are attributed to preventable causes. As Healthy Lung Month comes to a close, we hope to raise awareness and encourage anyone at high-risk to consult a doctor about getting screened as early as possible.

9 out of 10 lung cancer cases can be attributed to smoking cigarettes, which is the leading preventable cause of death worldwide. While smoking is largely considered to be a personal choice, that’s not the case for those who involuntarily inhale tobacco smoke. Secondhand exposure claims 7,300 deaths a year, which not only puts non-smokers at risk, but pollutes the air and environment as well. While both smoking and secondhand smoke play a major role in the rate of existing lung cancer cases, the amount of diagnoses are slowly reducing nationwide as a result of a decreased number of people smoking cigarettes.

Screening is designed to detect a disease in individuals who present no symptoms, but are considered at high-risk of developing cancer. While this may sound like a simple procedure, CT scans are costly, associated with adverse health effects, and may present potential false positives. While these concerns have warranted healthcare professionals to only screen those considered high-risk, this still includes around 9 million Americans today.

Another major contributor to lung cancer is a product of our own environment – radon. A natural gas released from rocks and dirt, radon exists outdoors at safe levels. These fumes are invisible and can seep into homes or buildings without our knowledge, where they then become trapped and concentrated. The gas is responsible for as many as 20,000 lung cancer cases each year and, unfortunately, the only way to know if one has been exposed to heighten levels of radon is to conduct a proper test. The most common ways radon can enter the home include:

There are still a handful of other carcinogens that have proved lethal for the lungs. Asbestos, for example, continues to be a leading factor in occupationally-related cancers. In the past, the toxin received immense recognition because of its strength and thermal resistance, however, it has since proved to cause the severe cancer, mesothelioma. The inhalation of another occupational hazard, silica, is is not only linked to lung cancer, but an irreversible condition known as silicosis. Workers at high-risk of exposure to either of these hazards should be trained on how to properly handle them and avoid returning home with contaminated clothing or equipment. High-risk fields include:

The best way to protect public health at large is by helping those close to you quit smoking. While this may seem obvious, your loved ones may feel it to be out of their control and as if there’s nothing they can do to break this toxic cycle. Sharing the reality of the statistics surrounding cigarette smoke, secondhand smoke, and human health may help them take a second thought before reaching for their next cigarette. Even if they don’t quit altogether, they may be more mindful of where they smoke and who is affected.

If you know someone who works in a high-risk field, talk to them about the potential risks of airborne toxins and encourage them to notify their doctor of their occupation. This may be the extra push they need to finally consult a professional and ultimately catch an occupational disease in the early stages.