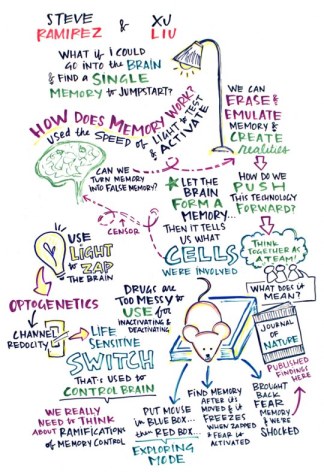 Director Christopher Nolan’s (of Batman and Inception) fame has a distinct fascination for memory, a theme he frequently explores in his films. In 2000’s Memento, protagonist Leonard Shelby suffers from a real (but extremely rare) condition that disallows him from making new memories. He remembers his childhood and his past but exists solely in a short-term memory present tense that fades after a minute or two, only to be erased and replaced again and again. In the film his wife is brutally raped and murdered. Unable to experience the tempering effects of time and psychologically incapable of moving on, he lives with a constant and fevered desire to catch her killer.

He frequently burns possessions of her in an attempt to gain some sense of closure, but these memories he tries to create never stick. He dispiritedly utters one of my favorite lines of the film:

“I can’t remember to forget you.”

Recently scientists at MIT may have found a way to replace memories or to erase them altogether.

Publishing in Science, a team of researchers claim to have created false memories in mice. The team was able to condition mice to behave fearfully in an environment that was different than the one in which they had actually been exposed to electric shocks.  The study, performed by Steve Ramirez, Xu Liu, et. al., could fundamentally alter our understanding of the physical, neuronal aspects of memory function. The team also speculates that this research could be used to literally turn memories on or off, a revolutionary idea that many people likely find liberating and terrifying in equal measure.

To train the mice, the researchers first had to locate a specific memory in their brains. In this Ted Talk, Liu and Ramirez detail how they were able to identify the specific cells responsible for a memory. When a mouse was put into a new environment, its brain would light up with neuronal activity. Liu explains that when these cells are activated, they leave behind a “footprint” that makes it possible to track their activity and put a sort of neuronal bookmark on them. Using a technique called optogenetics, the team was able to install an artificial “switch” that lets them literally turn these brain cells on or off by shooting them with laser pulses.

To summarize the complicated and detailed experiment: Individual mice were put into a new environment, a blue box. The neurons responsible for creating the memory of the blue box were traced and made to activate in response to pulses of light. The mouse was then put into a different new environment, a red box. While in the red box, the researchers administered mild electric shocks to the mouse while activating the cells responsible for remembering the blue box. The mouse was, in effect, being reminded of the blue box while being shocked in the red box. Then, the mouse was put back into the blue box, where it fearfully responded as if that were the environment it was conditioned to fear, despite the fact that the mouse had no historical reason to be afraid of the blue box.

The scientists very literally Incepted a mouse with a false memory that made it afraid of an environment it had no reason to fear.

In addition to being able to turn a memory on, Liu and Ramirez maintain that they can also turn it off, and even believe it will be possible to customize and edit memories in the future. These alterations can be viewed as a controlled version of the way our minds naturally distort our recollections, which is one reason why eyewitness testimony is so fundamentally flawed—our brains are famously prone to misremembering. This groundbreaking technology could change one of the most important aspects of being human: the obviously profound relationship we all have with our past.

The possibility of erasing bad breakups or the sources of Post Traumatic Stress Disorder, to creating new versions of our old selves, can be both an invigorating horizon of opportunity as well as the introduction to an Orwellian nightmare, depending on both the individual involved and what memories are being tinkered with.

One of my fundamental beliefs is that every human being fully owns themselves and may do anything to their body they wish, with the important caveat that they alone are responsible for their actions. The idea of a third-party deleting or installing memories is of the utmost abhorrence. However, for better or for worse, I believe that individuals should be allowed to selectively modify their own past as they see fit, despite all the inherent troubles of getting the rest of the world to go along with the story you’ve created. (Imagine having to tell everyone to never bring up an ex before you get your memory of him/her erased…and how that totally wouldn’t work.)

I like to focus on this research as being a way for mankind to better understand memory and the neuronal processes in the brain. However, the idea of erasing or manipulating memories is interesting and does create a fundamental paradox. If I change my own recollections, my perception of the past that created my personality and worldview will have been altered by a person that I no longer fully recognize or accept as truly being “me.” The person who altered their memories would in a very real psychological sense no longer be the person that had the memories changed in the first place.

So who would you truly be? The Before or the After?

On a humorous note that I simply couldn’t pass up, writing about this story has brought up one of my favorite moments from Seinfeld. In the show, Jerry Seinfeld is dating a cop and is nervous about taking a lie detector test. Jerry asks George Costanza, the consummate and ubiquitous teller-of-fibs, for advice. George, absolutely deadpan, gives his counsel: