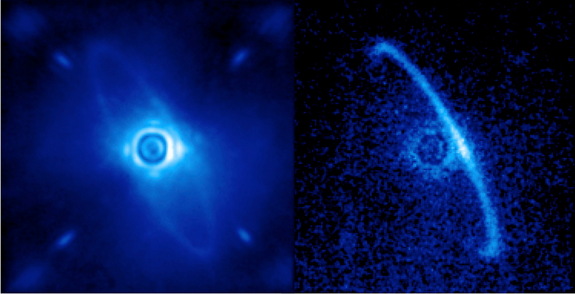 The exoplanet imager’s first image: not an exoplanet. http://www.space.com/

To date astronomers have discovered well over 1,000 exoplanets, or planets that circle stars outside of our own solar system. According to NASA, there are 3603 objects that are candidates for being an exoplanet, and 1015 confirmed exoplanets (verified by several different observers with several different instruments, reaching a minimum confidence level of 99.9999%).

All of these planets were found by NASA’s Kepler telescope, which also happens to be a solar powered spacecraft. Unfortunately Kepler does not allow us to know the composition of each planet, only that a planet is or isn’t there. Now, due to the creation of a new, high powered observational tool, all that is changing. 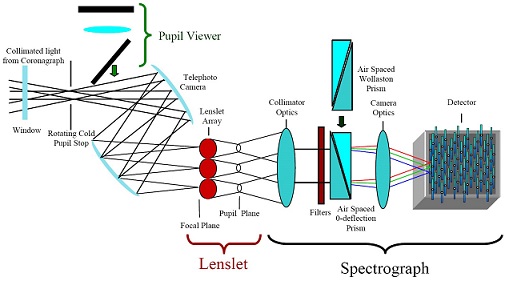 A look at how Gemini functions. http://spie.org/

Throughout history hundreds of different observational tools have been created to observe the universe. Even before it was understood that we are part of a galaxy, let alone surrounded by exoplanets, human eyes looked to the stars in wonder and awe. Now we have the power to not only view those stars close up, but to also view the very composition of their planets. The tool that affords us this power is called the Gemini Planet Imager. The imager is an optical enhancement currently being used in the Gemini South telescope in Chile. It was built by a team of U.S. and Canadian institutions, funded by the Gemini Observatory, which is an international partnership comprising the U.S.A., U.K., Canada, Australia, Argentina, Brazil & Chile. Gemini is also partially funded by NSF, NASA, the University of California and the Laboratory Directed Research and Development funding at the Lawrence Livermore National Laboratory.

Humanity already has multiple massive telescopes including the Kepler and Hubble orbiting the Earth, why can’t they just do Gemini’s job? The purpose and function of the Gemini Planet Imager is uniquely different when it comes to exoplanet detection. Kepler locates exoplanets indirectly by focusing on a star and finding the “dark” spot the planet produces on the image when orbiting between the star and the telescope. Gemini on the other hand takes a more direct approach by directly detecting the light an exoplanet gives off. According to the Gemini Planet Imager website,

GPI will detect DIRECTLY the light from an extrasolar planet…Almost 1,000 extrasolar planets are known today, but mostly through indirect Doppler techniques that indicate the planet’s mass and orbit or transit events that measure the planet’s size and orbit. If we can directly pick out a planet from the star’s glare, we can use spectroscopy to measure the planet’s size, temperature, gravity, and even the composition of its atmosphere. By targeting many stars we will understand how common or unusual our own planetary system may be. 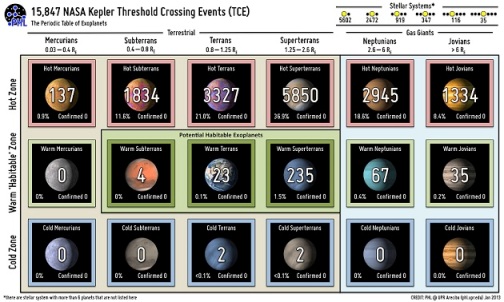 The periodic table of exoplanets as of January 2013. http://phl.upr.edu/

The Gemini Planet Imager saw light for the first time in November 2013, and has been working without a hitch ever since. Being eight times more sensitive than any existing imaging device, Gemini is the crowning achievement on an entire year of exoplanet discovery and analyzation in 2013.  It can even scan and processes images 100x faster, taking only 60 seconds.

The galaxy is a huge place, and although the Kepler telescope has detected thousands of planets and stars, that doesn’t even scratch the surface of the 300 to 400 billion stars in the Milk Way Galaxy. The Gemini Planet Imager will at least give us a little more quality to the small quantity of planets we have in our planet image menagerie. 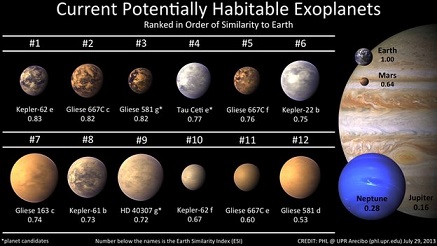 The Kepler telescope and the Gemini Planet imager focus specifically on finding exoplanets similar to Earth. Scientists generally categorize discovered exoplanets by size relative to Earth. In a study published in the Proceedings of the National Academy of Sciences of the United States of America on October 22, 2013, Scientists stated that after observing 42,000 Sun-like stars analyzed by Kepler, they had found,

603 planets, 10 of which are Earth size and orbit in the habitable zone, where conditions permit surface liquid water…22% of Sun-like stars harbor Earth-size planets orbiting in their habitable zones.

Along with Earth-like planets, astronomers have also discovered a solar system that shares a relatively large number of similarities with our own. It’s a good thing there isn’t a precise Earth analogue in the system otherwise there would be no way to prove that the system isn’t just one cosmically gigantic mirror. Our collective sanity has been spared.

Great technology will of course give rise to greater technology ad infinitum. That means a Google Galaxy ‘planet surface view’ is in humanity’s future. Awesome. 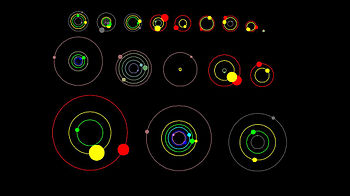 The orbits of different solar systems found by the Kelper telescope. 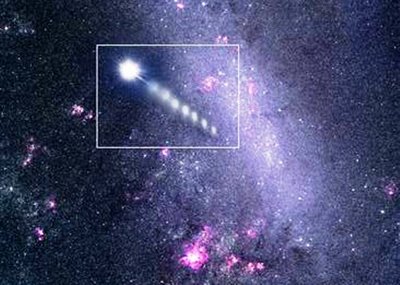 Hypervelocity stars come and go as they please. http://www.dailygalaxy.com/

A brand new type of star has been discovered by graduates at Vanderbilt University. It is a new type of hypervelocity star, one that may not be from our galaxy.

According to Vanderbilt University graduate student Lauren Palladino, lead author on the study,

Astrophycists have discovered hypervelocity stars before.  They are stars that move fast enough (at least 1 million miles per hour relative to the motion of the galaxy) to escape the gravitational grip of the Milky Way. Usually the stars attain their incredible speed by passing close to the mega blackhole (massing approximately 4 million suns) at the center of our galaxy and being ejected out into the void. These new hypervelocity stars, however, are clearly not originating from the center of the galaxy. In fact, they appear to be originating from far outside it. 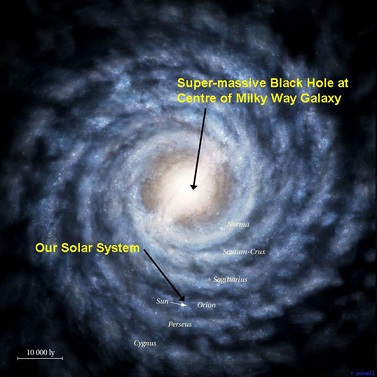 By tracing a star’s trajectory and current position over the course of several weeks astrophysicists can construct a route that the star must have traveled on. The anomalous hypervelocity stars had a trajectory straight from nowhereville, Universe. So far 20 hypervelocity stars of the exotic variety have been spotted.

How did these particular stars pick up so much speed if not from the Milky Way’s central black hole? Where exactly are these stars coming from? Most importantly, can we eventually use rogue hypervelocity stars as a form of public interstellar transportation? This far from the galactic center, we would be waiting at the star-stop for an eon at least.

So, maybe using a hypervelocity celestial body as a form of high speed transportation is unrealistic, but what about living on one? According to one theory, the idea is totally plausible. Many rogue planets are just roaming around the galaxy, swayed this way and that by varying celestial mass and gravity. Ejected planets charging through the void of space could still retain an atmosphere, as well as heat and water with an adequate amount of pressure. It is perfectly possible that there is intelligent life whose lore and language does not contain a sun or moon, or night and day, just the ever-changing stars.

While Earth has a home in the outer reaches of an arbitrary arm of the Milky Way Galaxy, other stars and planets are just passing through. So long… 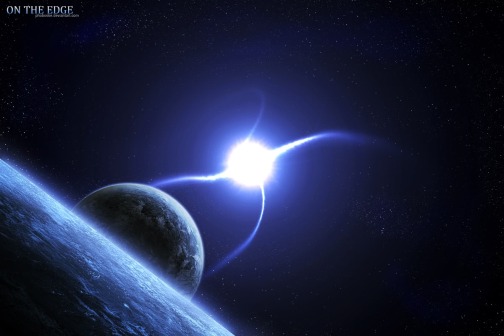 Some 60 light years away lies Planet HD 189733b, second of its kind as it resembles our humble home, Earth. This planet, let’s call it Blue (due to its blue hue which is probably the only thing resembling Earth) is actually a very interesting planet, as it frequently has rain, like Earth, but not really like earth at all since the rain is curiously made of glass and not water.

This exotic blue planet, full of various gases that make it up, has 4,500 mph winds which possibly cause glass to rain sideways. The blue hue of the planet is the most interesting part, due to water and oceans reflecting light, hinting at habitability and the possibility of life. However, with the extreme weather patterns and the intense heat of the planet (2,000°F to be exact), the planet is not likely housing anything but gases and well, glass. Lots and lots of rainy glass. Who knows though, maybe Chuck Norris lives there.

Related Article: Life, It’s All Over The Place

Another new development in our galaxy is that of the birth of a Supersun. It will contain 500 times more mass than our Sun and it will glow an eerie blue due to its surface temperature of over 50,000°F, which is 5 times hotter than our Sun, thus the nickname Supersun.

Though still under construction, as gases and mass are condensed and compressed under the cold star’s gravity, it will eventually build itself into a heaping Titan of a star, one that Titans of old would be proud of. The coolest part about all this is that scientists are able to view the creation of this Supersun second by second as it piles together, until it combusts and becomes the star it was meant to be! Superman would most likely pass out from all the power that this Supersun would supply him with; maybe it would make for a better movie than the newest Superman rendition.

These finds represent very interesting developments in our galaxy, and with ever expanding space, we may find that we are in fact not alone. In case you were curious, here is a little something on our boy ‘Blue,’ Planet HD 189733b:

Wondergressive: Life, It’s All Over The Place 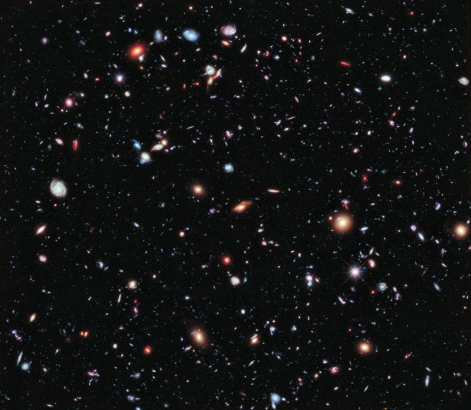 The Hubble Telescope has captured a new vision of the universe, the deepest vision yet, called the eXtreme Deep Field, or XDF.  This image reveals thousands of galaxies, 5,500 to be exact. It is actually a tiny fraction of the constellation Fornax capturing light over many hours of observation. “The faintest galaxies seen are one ten-billionth the brightness of what the human eye can see.”

It’s hard to believe that random mess of light is a speck of dust in the mansion of light and darkness that is our home!