Even before the tragic shooting at Sandy Hook, law-makers have been eager to renew the Assault Weapons Ban and to push for stricter legislation. After that horrific event, however, the zeal for gun control has been ramped up to eleven.

Senator Dianne Feinstein (CA-D) has introduced a bill that would severely limit what firearms Americans can own.

President Obama has also endorsed “common sense” gun control restrictions, and urged Congress to support such measures. It’s almost impossible to go a day without seeing some report or editorial on the controversial issue.

The popular perception throughout the country is that violent crime, and in particular gun violence, is getting worse.

Despite what gun control proponents and the media would have you believe, there isn’t an epidemic of violence in America. The reality is that crime has dropped dramatically in America for at least the last two decades. The US is as safe as it’s been in a long time.

The gun control debate is complicated and multi-faceted, and for now I will only focus on one aspect of it. Like this father who lost his child in the Sandy Hook shooting, supporters of gun control often ask “Why does anyone need an assault weapon?”

There are several problems with this question. Firstly, this is supposed to be a free nation. Gun owners don’t have to justify why they need anything, just as no one is supposed to have to justify owning two cars, a home stereo system, a pair of shoes, or anything that they happen to enjoy, as long as they do so peacefully. Additionally, the criteria that define an “assault weapon” are largely meaningless. They focus on aspects of a gun that makes them look scary and military-like, including pistol-grips, barrel shrouds and foldable or detachable stocks, rather than characteristics that would actually make a firearm more dangerous than any other.

However, I’ll play along. Why does anyone need weapons like these? Although I believe strongly in the freedom-oriented answer that no one needs a reason, but rather simply that we have a right to own firearms, history has provided many examples of why gun ownership is such an important civil right. It can also be argued that the Second Amendment largely serves to ensure that our other Constitutional rights remain guaranteed.

Human beings have the biological right to defend themselves, and for the last 500 years firearms have been the weapon of choice. Not just from murderers and burglars, people also have the right to defend themselves from tyrannical governments, which was one of the fundamental principles that gave rise to the United States. The lesson of history is absolutely crystal clear: Step One in subjugating a society is to disarm them. The Second Amendment was designed disallow this.

Slavery is rightfully called the Original Sin of the United States, and most people understand the tremendous efforts undertaken to rid this country of that evil institution. Fewer people recognize, however, the perverse legal machinations that helped preserve the power of white slaveholders at the expense of slaves and free blacks. In 1834, likely in response to a Nat Turner-led slave uprising a few years earlier, skittish Tennessee lawmakers altered their state constitution to exclude blacks from owning and keeping firearms. In the 1840s, the State Supreme Courts of both North Carolina and Georgia similarly reinterpreted state law to bar blacks the right to armed self-defense. Most tragic of all, in the infamous Dred Scott case the US Supreme Court decided that blacks were not citizens and couldn’t be accorded the same rights as whites. It’s clear that early Americans fully understood that a disarmed black populace was essential to preserving the institution of slavery:

“[Citizenship] would give to persons of the negro race, who were recognized as citizens in any one State of the Union, the right to enter every other State whenever they pleased, singly or in companies, without pass or passport, and without obstruction, to sojourn there as long as they pleased, to go where they pleased at every hour of the day or night without molestation, unless they committed some violation of law for which a white man would be punished; and it would give them the full liberty of speech in public and in private upon all subjects upon which its own citizens might speak; to hold public meetings upon political affairs, and to keep and carry arms wherever they went. And all of this would be done in the face of the subject race of the same color, both free and slaves, inevitably producing discontent and insubordination among them, and endangering the peace and safety of the State.”

After the Civil War, with blacks ostensibly given the same rights as white citizens, people found different ways to keep Freedmen under their boot. The Ku Klux Klan was founded by mostly white southerners in the late 1860s with the intent to use violence and coercion against blacks in order to maintain white supremacy. In the first few years after the war, the KKK murdered and terrified thousands of blacks and those who worked to support the recently Freedmen. They staged political riots and made it almost impossible for blacks to vote. They also confiscated firearms from the former slaves, helping to ensure that blacks would be largely defenseless against the assault.

Adam Winkler, UCLA professor and author of Gun Fight: The Battle over the Right to Bear Arms in America, contends:

“It was a constant pressure among white racists to keep guns out of the hands of African-Americans, because they would rise up and revolt.” he said. “The KKK began as a gun-control organization. Before the Civil War, blacks were never allowed to own guns. During the Civil War, blacks kept guns for the first time – either they served in the Union army and they were allowed to keep their guns, or they buy guns on the open market where for the first time there’s hundreds of thousands of guns flooding the marketplace after the war ends. So they arm up because they know who they’re dealing with in the South. White racists do things like pass laws to disarm them, but that’s not really going to work. So they form these racist posses all over the South to go out at night in large groups to terrorize blacks and take those guns away. If blacks were disarmed, they couldn’t fight back.”

Racial overtones continued to affect the gun control debate after the end of World War II. In 1967, the Black Panthers staged an armed stand-in of the California State Capitol in response to legislative attempts to ban the open carry of loaded firearms. That event, along with recent high-profile political assassinations and race riots in Los Angeles and Detroit, heavily influenced the Gun Control Act of 1968. The letter of the law is race-neutral and I don’t believe that the law was explicitly written to disenfranchise minorities. However, in practice the Gun Control Act serves to strip away the Second Amendment rights from blacks and hispanics much more than it does from whites. Among other prohibitions, the law restricts the right of both felons and of any “unlawful user” of a controlled substance to keep and bear firearms. Considering that 80% of state prisoners are black or hispanic, it is clear that this law disproportionately affects minorities, and prevents them from enjoying the full benefits of citizenship.

I do not wish to suggest that current calls for stricter gun regulation are racist in origin or intent, but rather I want to emphasize how such restrictions have been used in the past to disenfranchise minorities and why Americans should be leery of further intrusions on the Second Amendment.

The primary purpose of firearms is to be able to defend yourself and your property, in the 19th century as well as today. Strict gun laws have the effect of disarming law-abiding citizens and emboldening criminals who are undeterred by legislation written by some politician in Washington. Chicago witnessed over 500 murders in 2012 despite having some of the strictest gun laws in the country. Mayor Rahm Emanuel commented on the ongoing violence in the Second City and himself conceded that gun laws do not prevent criminals from gaining access to illegal firearms:

“Chicago has reached an unfortunate and tragic milestone, which not only marks a needless loss of life but serves as a reminder of the damage that illegal guns and conflicts between gangs cause in our neighborhoods.” 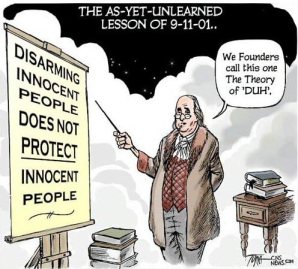 They who can give up essential liberty to obtain a little temporary safety, deserve neither liberty nor safety.

Only in this case, people and politicians are clamoring to subvert essential liberties in order to obtain a decrease in safety and to corrode our rights.As a free nation, we must not further sacrifice our rights for an illusory Siren-song, one that promises eternal sanctuary but rather delivers increased vulnerability and pretense to further erode our basic freedoms.

We always have to struggle to preserve our liberty, especially in times of hardship. After all, the Second Amendment says that

…the right of the people to keep and bear Arms, shall not be infringed.

It doesn’t add “unless something really tragic happens.”

3 thoughts on “A Case Against Gun Control”