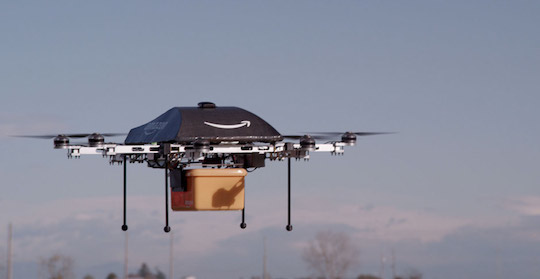 Nowadays Santa has more time to himself, Amazon Drones fit down chimneys much easier. http://regmedia.co.uk/

The Founder and CEO of Amazon.com, Jeff Bezos, recently told 60 Minutes about Amazon’s newest piece of technology: delivery drones. Bezos admitted that it sounds like science fiction, but it is however, very real.  Within 4 or 5 years, 86% of the products on the site will be delivered to your door by a flying drone within 30 minutes. The new service will be called Amazon Prime Air.  You can even order at any time of the day or night. As long as what you order is less than 5 pounds, it’ll get to your door faster than Jimmy Johns.

Here’s the craziest part: all of the drones will be automated. Robots will be flying through the air, originating from one of ninety-six Amazon fulfillment centers, and landing at your home clutching your consumerist drug fix without the help of a human master! Renegade robots; this is the beginning of the end…

Although Bezos didn’t mention it, I wonder if we will eventually be able to input any set of coordinates into Amazon and have, let’s say, a tent delivered to yourself after you make camp at Rocky Mountain National Park. Just a thought.

This announcement comes at a time drones are becoming a source of increasing concern around the world. Drones controlled by a technician have been used in war as reconnaissance devices and as mobile missile launchers. They are also being used by police within the U.S. as surveillance devices. These uses of drones have given the technology a connotation befitting a 1984 subplot.

The future of warfare, inspired by Call of Duty. http://www.washingtonpost.com

It is frankly amazing that Amazon will be at the forefront of this emerging technology, and won’t be using it to kill from a distance and peer through windows as we download music and movies. This presents a great example of how a technology can have such drastic extremes in the way it is developed, used, and anticipated.

Some people are not so optimistic about Amazon’s drone initiative. According to CNBC’s Jim Cramer, drones will crash everywhere, hit people in the head, and wreak general havoc.  Cramer urged,

Holy cow. It could be like ‘World War Z’ out there.

Regardless of the inherit dangers with delivery drones I think an automated robot that doesn’t text and drive and has complete awareness of its surroundings and precision control of its body is far safer than a fumbling human surrounded by metal, rocketing down the road at 80 mph. Google’s self-driving cars have already proven just how safe and effective an automated machine can be.

Amazon has a colossal presence on the internet and on the planet itself. There are fulfillment centers and headquarters spread across five continents. The company is a big name in multiple industries, including tablet PCs, online retail, and cloud storage. Despite its presence, it still has massive growth potential. The Amazon stock price is at an all time high and in the last year has increased by 63%. In the last 5 years it has increased 800%.  Although the stock seems incredibly overpriced based on the stock price relative to its earnings, the price continues to rise and the company continues to grow.

The Amazon rain forest slowly dies, while Amazon.com slowly takes over the world…

Here’s a video of the automated amazon drones at work:

CBS News on the Site