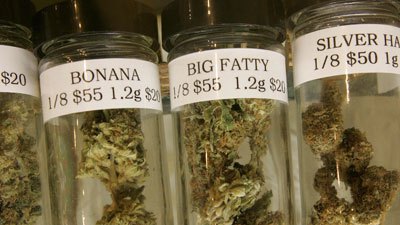 Growing pot takes as much creativity as naming the crop. kwgn.com

Excitement about New Years is still in the air, and in Colorado, so is a colossal amount of pot. New Years Day marked the opening of some 37 pot shops licensed to sell cannabis recreationally to people 21 and older. The first person ever to buy pot recreationally was an Iraq war veteran, and boy did he look happy about his big bag of legal herb. He, along with the other marijuana enthusiasts, are responsible for $1 million in sales on the first day.

I guarantee his 15 minutes of fame was celebrated by getting legally high. rt.com

People are smoking so much that less than a week after New Years, the supply is already running out. Pot shortages are widespread despite the fact that recreational marijuana prices are more than double the price of medical marijuana prices, sometimes costing more than $400 per ounce before tax. Luckily for everyone’s stress levels, that price is projected to settle closer to $185 per ounce within the next few years.

With so much pot being smoked, everyday Colorodans, stoners and weekend warriors alike are sure to find the results of a recent study very interesting.  Researchers have recently discovered that consumption of THC, the psychoactive component of cannabis that gets people high, boosts the production of a substance produced in the brain called pregnenolone. Pregnenolone inhibits cannabinoid receptors in the body from being activated by THC, creating a negative feedback loop: The more pot someone smokes, the more pregnenolone is produced, the less effective THC is, the more pot a person smokes. I suppose it wouldn’t be a stretch to tell a cop, “sorry officer, I was just smoking to sober up.”

Related Article: Smoking Pot Without Getting Higgh: But Why?

Here’s a mug shot of the brain’s buzzkill. http://www.marijuana.com

The researchers believe this study may present an effective approach for treating people who have a harmful psychological dependence on pot. Administering pregnenolone, or encouraging pregnolone synthesis through some other means besides cannabis consumption may be the answer that pot ‘over-enthusiasts’ have been looking for. With up to 4.5 million Americans harmfully dependent (defined as having “difficulty controlling their drug use and cannot stop even though it interferes with many aspects of their lives.”), this is wonderful news to a great number of people.

So, should we start taking bets on whether this study will cause pot smokers to think twice before they roll that second joint? Seems like a risky bet since nothing appears to be stopping the insatiable hunger in Americans to take back their great national heritage. That won’t stop the DOJ from trying though.

The DOJ, under direction from President Obama, announced in August, 2013 that they would not interfere with the legalization of cannabis in Colorado. They assured Colorodans they would take a “trust but verify approach.” Apparently the DOJ’s idea of “trust but verify” comes in the form of raids and imprisonment.

About six weeks ago extensive raids on medical marijuana shops and growers took place in Denver.  Jeff Dorschner, spokesman for the U.S. Department of Justice in Denver, told the Denver Post that,

No arrests were made in the raids, the raids were being conducted by the Drug Enforcement Administration, Internal Revenue Service criminal investigations unit, the Denver Police Department and state and local law enforcement.

More than 12 Denver metro area marijuana facilities and two homes were raided in total. What’s worse is that these locations were strictly medical marijuana dispensaries whose sole business is providing millions of Americans with a safe, effective, non-addictive, minimal side-effect involved cancer cure.

So glad police are saving the day from such dangerous criminals. nevergetbusted.com

The raids in Denver have a powerful backing and voice in Washington. It comes in the form of billions of dollars in lobbying from countless industries. From the companies’ perspective I’d be afraid of pot legalization too seeing as how much people love their favorite weed. A recent survey administered to 404 medical marijuana patients in Canada revealed that,

What a coincidence, the same companies that spend billions of dollars on lobbying against legalization happen to be the ones that would be hurt most by legalization. Theoretically, the lobbying shouldn’t make a difference anyway since nearly 2/3 of Americans believe that the government should keep its snout out of state marijuana laws.

Related Article: The Senate Is Useless and Should Be Dismanteled

Will our representatives ever listen to the will of the people again? Will the current, belligerent congressional activity continue for good? The Fed will have to make a move soon with states legalizing medical marijuana so often. New York is preparing to become the 21st state to legalize medical marijuana.