Currently, human societies’ increased reliance on fossil fuels is creating a need in the future for an alternative yet equally functional energy source. The solution is a green, fuzzy, and live organism: algae. Multiple organizations have already taken initiatives and identified algae as a viable energy producer. Algae could very well be the future of energy.

Nowadays, the United States is falling drastically behind the expected reductions in fossil fuel consumption. Fossil fuels are natural fuels of decomposition which take millions of years to replenish. According to a leader in the green energy section in Britain, Ecotricity, at the present usage rate, nearly 11 billion tonnes a year, fossil fuels are expected to run out in about 53 years, with oil running out in less than 35. Fossil fuels are the common route in energy usage, blowing all renewable energy out of the water. Fossil fuels supply a whopping 80.2% of energy, compared to the mere number 11.5% for alternative energy, provided by the PEW Research Center. If this continues at the same rate as the population spike, this date may arrive sooner than expected. An alternative, yet equally efficient solution must be looked at before the time to switch has run out. 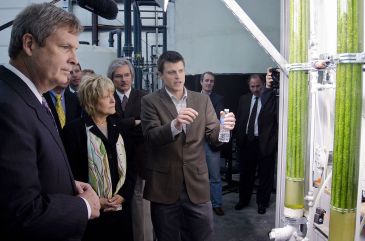 Algae is a simple yet complex alternative to non-renewable and other forms of renewable energy production. To understand how we may use algae for energy, we first have to understand algae itself. Algae is a living organism, specifically a eukaryotic organism. Eukaryotic organisms, as opposed to prokaryotes or archaea, have a nucleus and numerous organelles, among other differences.  Eukaryotes can be split into 4 major kingdoms: animals, plants, fungi, and protists. The special part about algae is the growth rate. The average growth for algae is exponential. According to Fahri Koray Sakarya, a Turkish expert in environmental sciences, 0.4 day^-1 is the daily growth rate. This means algae growth will slowly become larger until the point where it grows in large batches at a time. In the words of the Office of Energy Efficiency & Renewable Energy,

…algae, small aquatic organisms that convert sunlight into energy and store it in the form of oil.

This means, once we have harvested the large batches, we will be able to access tons of oil at a time, making up for the depletion of natural fossil fuels. For a while now I’ve been talking about how algae could play a big role in the future, but what about in the present. Where is algae right now?

The green machine will be able to save billions if it becomes the everyday norm and takes over for fossil fuels. If most of the human population were able to swap to algae, fossil fuels could be focused on industrial uses, while residents would be able to access a cleaner and more efficient energy source. Many companies have already hopped on to the algae-fuel train, one being NASA. Seambiotic has partnered with NASA to efficiently grow and harvest the oils of algae. Some farms are already planning to grow nearly 200 gallons of fuel from 1 acre of algae per year. Once technologies and funds have been invested in this idea, the price per barrel will drop significantly, as the industry will be expanding. Algae biofuel farms are becoming the norm for many, and the number will continue to grow. If the U.S. is able to make a push for algae fuel, further globalization will occur, taking algae energy to a whole new stage. 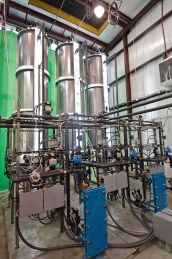 As one can see, algae is an exceptionally productive source of energy. This solution benefits the environment, as the carbon emissions may drop by a monumental 50 to 70 percent, as well as the economy in the future,as algae will replace fossil fuels. Algae is a perfect fit for the criteria of humans, innovative and efficient, the basis of mankind itself. Algae growth will eventually be enough to supply a global demand, but it is crucial we make the first step into the future right now.

If you are interested in learning more about the process of algae-to-energy, click on this video link: Algae to Fuel by the U.S. Department of Energy