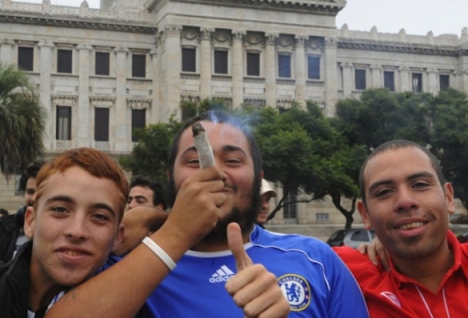 Uruguay is strongly pushing to pass a law that would allow a state monopoly on the production and distribution of marijuana. This would make Uruguay the first nation to sell cannabis to its citizens directly.  The government claims that it is an attempt to end violence and ensure that cannabis users have a safe and regulated product. The new push is being led by the newly elected regime lead by Jose Mujica.

According to Sebastian Sabini, the president of the parliamentary commission:

“We’re putting this forward as international policy.  The war on drugs has failed. There are more consumers and more violence. Uruguay is opening up a new path.”

Uruguay is predominantly interested in separating cannabis from hard drugs like cocaine and heroine as they believe by doing so less people will become addicted to the hard drugs.

The United Nations is concerned because the law is a breach of the 1961 convention on narcotics, but the Uruguayan government stresses that the global war on drugs has utterly failed in every way.  Why continue obeying a decision if it is only making things dramatically worse?

Interestingly, marijuana legalization activists are labeling the move as totalitarian and urging the government to also legalize home cultivation.  Additionally, Uruguay has stated that it will still be a illegal for foreigners to purchase cannabis as they do not want to create a country fueled by drug tourism.

Uruguay, like countries all around the world, has recognized that the current global policies on drugs have allowed governmental corruption, gangs to become more powerful and force people to look for cheaper, more widespread, albeit far more dangerous sources of drugs.

The world is long past due for a drastic change.

For more information on the war on drugs check out this international debate on the war on drugs hosted by Google+ with insight from generals, leading spokespeople, former presidents of Latin American countries, former celebrity drug addicts, United Nations representatives, and more.

4 thoughts on “Uruguay to Legalize Marijuana”