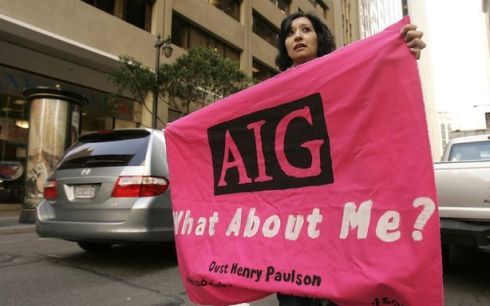 We all remember what a disaster the 2008 economic crash was. We also remember not wanting to give any of our hard earned money to the institutions that sparked the collapse- but the boys in charge decided to give our money away regardless.  This bail out money, $125 billion  to be exact, helped to keep AIG afloat and out of bankruptcy.  How do they thank us?  By suing the American people for even more money!

That’s right, AIG’s directors are currently discussing whether they will get in on a collective corporate lawsuit that will sue you and me for “short changing their stock holders.”  The company goes bankrupt, we hand them a fat stack of money we don’t really have, and they have the gall to turn around and complain that $125 billion wasn’t enough.  $125 billion! Could a corporation possibly insult us anymore than AIG has?

Sen. Elizabeth Warren (D-Mass.), who was the head of the government’s oversight panel for the$700-billion bailout fund reminds us that:

According to AIG, they have a responsibility to their stockholders, and it would be in their stockholder’s best interest to go ahead with the lawsuit. AIG, What about the people who kept  you out of bankruptcy, who are subsequently the same people whose economy you turned upside down while taking over a billion dollars in bonuses after the fact.

This is like a homeless man suing a person who has just given him everything they own because he wears a shoe size smaller than the shoes he was given.