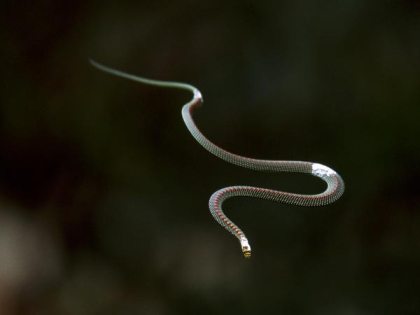 When you read “flying snake,” you might think of good ol’ Quetzalcoatl, the “flying serpent” deity of ancient Mesoamerica. You can rest easy though Montezuma, this flying snake looks nothing like Cortés. There is in fact a real, living snake that has the ability to glide up to 30 meters, about a third of a football field. Somebody get a few of these snakes drafted to the Broncos. America demands more suspense in its entertainment!

The paradise flying snake (chrysopelea paradisi), also known as the paradise tree snake, is a mildly venomous species of snake that can be found in many countries of Southeast Asia such as Singapore, Thailand, Indonesia, Malaysia, Myanmar and the Philippines. It belongs to the genus chrysopelea, a group encompassing 5 different flying snake species.

Biologists recently performed a study in which they closely observed the paradise flying snake in order to understand how such an unlikely animal can glide so well, and for so long. Co-author of the study Dr. Jake Socha from Virgina Tech explains how the snakes remain airborne for so long and with such excellent maneuverability.

The snakes flex their ribs as they launch to stretch and flatten the body to change their profile from a circle into an arched semi-circle. It looks like someone’s version of a UFO. 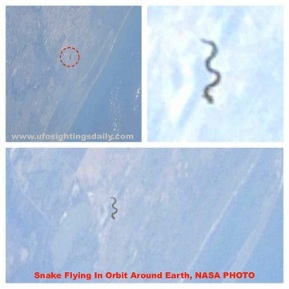 Did somebody say a UFO shaped like a flying snake? Oh my…
http://www.agoracosmopolitan.com

To get a better idea of the aerodynamics of the flying snake, Socha and his team created a model using a rod over water that could mimic a flying snake’s cross-sectional shape and mid-flight undulations. They found that although they could not mimic the snake with perfect precision, their model was still able to predict a great deal of the causes associated with the snake’s aerial lift. They found that the strange semi-circular geometry the flying snake morphs itself into creates a sufficient amount of lift to account for its incredible gliding abilities. Furthermore, they found that it was possible to alter direction with ease just by changing the overall angle of the model’s flight direction.  Socha hypothesizes that,

Maybe the [flying snake] does hold part of its body flat at some point, using it as a mechanism for control, explaining that twisting the body while airborne could allow the snakes to fine tune the forces on their bodies for precise flight control.

As is usual, nature trumped human ingenuity in the end. Socha pointed out that he and his team were unable to attain the incredible amount of lift and drag created by the flying snake.

If you make a rough estimate of the lift to drag ratio for the real animal, it appears to do better than what we got from this study. There is something in what the [flying snake] is doing aerodynamically that is not captured by the cross-sectional shape alone.

The researchers hope to continue studying the aerodynamics behind snake flight as it could lead to innovations in robotic movement and aeronautical design. If researchers get tired of studying flying snakes, there are plenty of other surprising flyers to choose from.

The following list of surprising flyers takes advantage of at least one of the following methods of flight: Free Fall (used in conjunction with other methods to catch prey) Gliding, Parachuting, Ballooning, Flapping, or Soaring. Furthermore, this list includes flyers that, while well known, are surprising due to incredible feats of flight.

Finally, the video below is a little treat. Camera’s attached to a peregrine falcon give you an idea of what it is like to be the fastest and most maneuverable flyer on the planet.

One thought on “Paradise Flying Snake and Other Surprising Flying Animals”