Earth itself is one of the best secret-keepers known to man. There are countless mysteries under its outer shell, but slowly, scientists are uncovering them. In the past few years, scientists have discovered pockets of water trapped beneath the oceans. Not only this, but they have also found evidence to support the theory of hidden oceans under Earth’s mantle. When I talk about these hidden oceans, I am not saying they are the conventional large body of water. These oceans are much different than the ones you can snorkel and scuba dive in. Right about now, you are probably wondering, “how is it possible? How did they find them? Why did it take so long? Why is this even important?” Finally, scientists are able to answer your questions with real concrete evidence.

This may all seem like a fantasy, but aquifers are now a reality. Aquifers are water-bearing sediments in the oceans, also referred to as water pockets. The reason they are called water pockets instead of ocean pockets is that the waters are two different solidities, two different colors, and two different types. These pockets are not made of Salt water, but rather Fresh water. The pockets were discovered a while ago when a drilling team in search of oil had mistakenly run into them, releasing bits of Fresh water into the sea. Since then, marine biologists have found many more, mainly under the Atlantic ocean. These water pockets are not a few cubic kilometers, but rather 2,800 cubic kilometers. To gain a better perspective, this is nearly equivalent to six Lake Eries. This specific aquifer was found by marine biologists. They perform a technique which uses Electromagnetic(EM) receivers to measure the current in waters. This is applicable in finding Fresh water because it is commonly known that Salt water is a much better conductor than Fresh water. When they notice a fall in current, they know they have found another aquifer. How these pockets were formed is a much deeper question. It is expected this water has been hidden from society since way back during the Pleistocene Ice Age. Our knowledge of aquifers has been around for tens of years, but recently we have taken a deeper interest, which has directly led to our better understanding.

As we continue researching these aquifers, we are slowly realizing how much of a role they may play in our future. It is common knowledge many countries around the globe are suffering from water shortages. According to the World Health Organization (WHO),

Some 2.2 billion people around the world do not have safely managed* drinking water services…

To allow a better understanding, this is roughly one in three people internationally. By 2025, it is expected half of Earth’s population will suffer from the water crisis. The water shortages around the globe are unreasonably harmful as they have also led 4.2 billion humans to lack of sanitation services. Yes, that is more than half of the population. When lacking sanitation, humans are at an exponentially higher risk for countless diseases ranging from Cholera to Diarrhea. Aquifers could very well be the solution to our woes. If Oceanic scientists continue discovering these aquifers, it would be logical to develop a technique in order to properly harness most if not all of this Fresh water. Once we do develop proper technique to harness the water, we move to the desalination step. Yes, yes, I did say it was Fresh water, so it should not need desalination; in this particular scenario, desalination is required. Since the Fresh water has been trapped below or near Salt water for nearly 2.6 million years, Salt water was able to slowly mix in with the Fresh water. This means the Fresh water does have some salt, therefore needs to be desalinated before drinking. Although desalination plants cost a hefty amount of cash, the bright side about this water is there is a much lower amount of salt, meaning the desalination of this water will be for less time and much less money. Aquifers will soon be the driving force in our efforts to reduce the impact of the water crisis.

Although aquifers are relatively old, the theory of oceans under Earth’s mantle is fairly new. The path to this discovery is very odd, but there is a connection. Deep down in Earth’s mantle, Richard Siemens and his research team from the University of Alberta have found diamonds. These are no ordinary diamonds, as they are water-based. When I say water-based, it’s not liquid water trapped in diamonds, but rather the elements which make up water (oxygen and hydrogen), are trapped in diamonds. Due to convection in Earth, where hot magma rises and cool sediment sinks underneath, the water from the diamonds is pulled out and pushed under hot magma. Once the elements are under the magma they begin to warm and bind, resulting in liquid water we are used to seeing. When researchers from the University of Nevada, Las Vegas decided to continue the diamond experiment, they found a very unique set of diamonds containing little bits of a particular type of water, Ice VII, better known as water-ice. Water-ice is a crystalline form of ice formed when water is put above 3 GPa (30,000 atmospheres). Ice VII is important because it fully supports and proves the theory of aqueous pockets under Earth’s mantle. 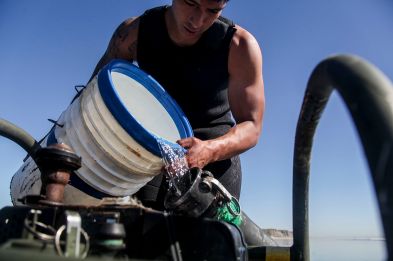 Aqueous pockets, unlike aquifers, leave an impact on the past instead of the future. It is the common theory by thousands of scientists that there was a large icy comet that had crashed into Earth, which had later melted and formed oceans. This is the common belief because when Earth was forming, it was most likely too hot for any water molecules to survive and cling to any space dust which would eventually become Earth. The newly found aquifers may finally provide a sustainable contradicting theory. The volume of water under Earth’s mantle is expected to be three times that of the surface water. This is much more water than an icy comet could have ever brought down. This means the water on Earth might have come from somewhere else: aquifers. The new theory of how this water came is a massive earthquake that allowed water to slowly seep through the crust and make up the ocean in the given time frame. Some of the water may have taken a much longer route and seeped through more rock. This is the expected path for Fresh water, as rocks serve as a natural filter. Who would have expected a diamond experiment would lead to the altering of a long-lasting belief in the science community.

For thousands of years, human nature has been to explore. This is precisely what we have done on both these occasions. The water shortage is growing at a large rate, meaning we need to continue finding these aquifers at an even higher rate. Aqueous pockets are still relatively new, but in the near future, progress will come. Both discoveries will take their place in history and mark their icy comet mark on both the past and the future. Earth has previously shown it holds countless secrets, and it is our job to continue uncovering them if development is our goal.